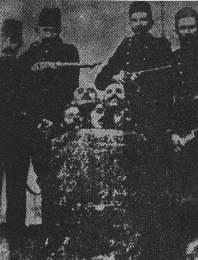 By 1914, the young turks were in total control. However, the world was in a panic. The first World War was going to start. By 1915, there was turmoil. The young turks viewed this as a great opportunity to do something about the Armenians…something terrible…and get away with it by blaming it on the War; and, finally they came up with the most inhuman and murderous solution: GENOCIDE. What is genocide? The Convention on the Prevention of the Crimes of Genocide (resolution 260 III of 9 December 1948) defines genocide as:
Any of the following acts committed with the intent to destroy in whole or in part, a national, ethnical, racial or religious group, as such: a) killing members of the group; b) causing serious bodily or mental harm to members of the group; c) deliberately inflicting on the group conditions of life calculated to bring about its physical destruction in whole or in part; d) imposing measures intended to prevent births (14) within the group; e) forcibly transferring children of the group to another group.’(15)

The young turks must have written the preceding passage, since It describes exactly what happened during the bloody genocide.